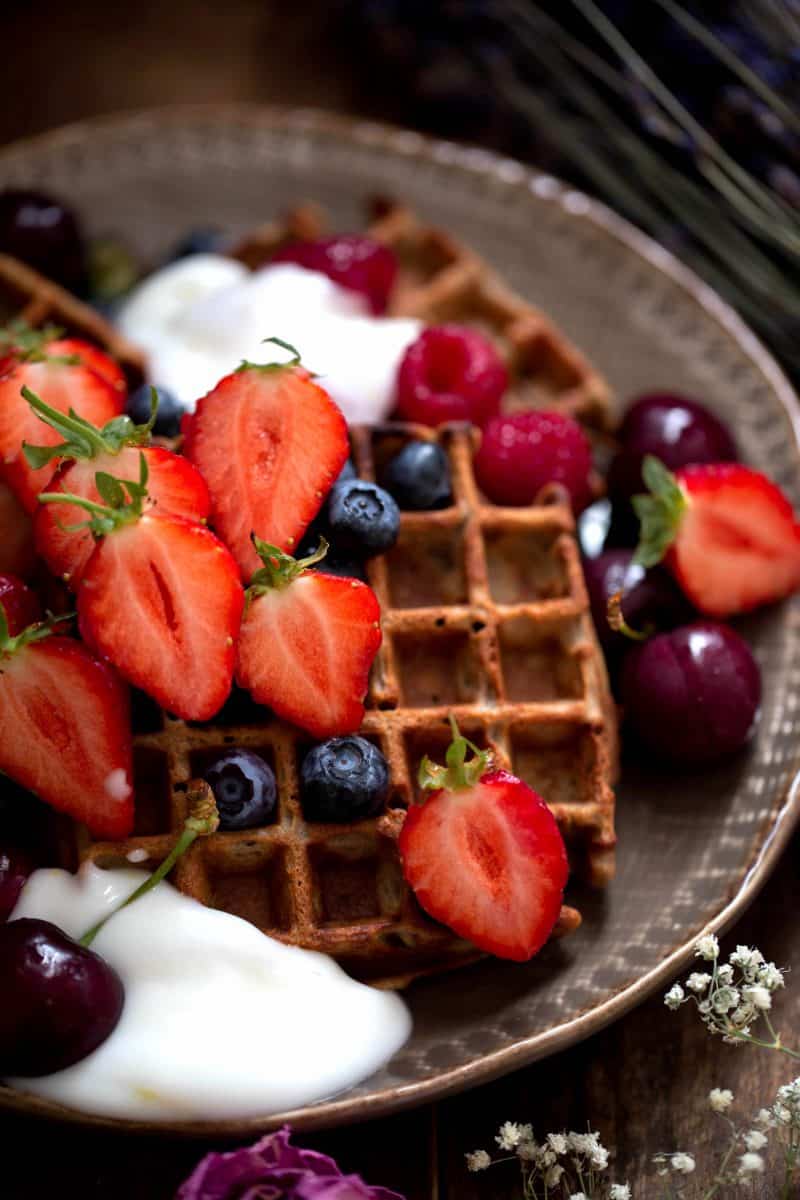 Listen..just because I am mostly gluten free that doesn’t mean I should miss out on waffles and I like my waffles crispy on the outside and fluffy on the inside. These Gluten Free Cinnamon Waffles with Ginger and Honey Yoghurt don’t disappoint. Also buckwheat has a naturally nutty flavour which makes them extra yummy.

My favourite thing about most recipes on my blog is their simplicity. This Gluten Free Cinnamon Waffles with Ginger and Honey Yoghurt recipe is the same. There is no over complication here.

These Gluten Free Cinnamon Waffles with Ginger and Honey Yoghurt just kind of happened. (Bit of a mouthful isn’t it?).I was making waffles for the kids. They requested pancakes and I said I could go one better and make them waffles instead. They were obviously thrilled. I recently got this waffle maker at a ridiculously cheap price on Amazon. I love you Amazon. I also love you, waffle maker. I cannot recommend it enough. It is absolutely brilliant. So easy to use and so convenient. It also doesn’t take up much space which is always a brucie bonus.

These Gluten Free Cinnamon Waffles with Ginger and Honey Yoghurt (It’s almost becoming a song) can be made vegan by omitting the honey and using an alternative liquid sweetener. I also didn’t use egg because I really need to cut down on my egg intake. Seriously. I love them but this has got to stop. Even without the egg, we devoured these waffles and the fresh fruit made them even more yummers. You can use any fruit here by the way. Some great alternatives include:

By the way, if you’ve never had buckwheat flour, it may take a little getting used to. I have an oat flour version of this recipe coming soon.

These waffles are not the kind you get in dessert parlours. Those are great as a one off. I actually made some of those the following day and was flabbergasted with the amount of sugar in them! No wonder they taste so great. Anyway as I was saying, buckwheat flour is different to other flours and tastes nutty and earthy. So give it a try and see if you like it. It is a healthier alternative to waffles so do bear that in mind.

On a side note, I was thinking today about all the changes I have been through over the past 2-3 years and all the small steps that I have taken to get to the mindset that I am at right now. I thought it may be an idea to share those steps with you to show how small steps can make such a massive difference long term. What do you think? I think smaller steps are not as overwhelming as say taking a massive leap e.g. no refined sugar forever.

Anyway, hope you enjoy this healthier recipe for waffles. Enjoy!

Gluten Free Cinnamon Waffles with Ginger and Honey Yoghurt - Gluten Free waffles that are crisp on the outside and fluffy on the inside. Served with fresh fruit and honey yoghurt